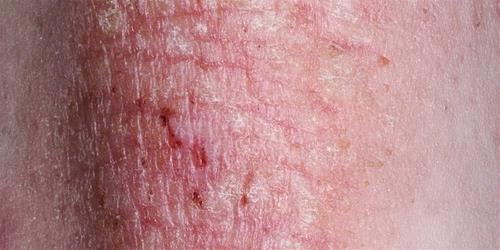 Eczema is a chronic inflammatory skin condition which causes areas of skin to become dry, hot, itchy, red and even cracked. It is sometimes called dermatitis or atopic eczema. Infants often suffer from eczema of the face, neck and trunk while older children are more commonly affected at the flexural and extensor surfaces of the arms and legs.

Eczema is the most common inflammatory skin condition in the world. It affects 30% of children in Ireland but the majority grow out of it (85%) and few go on to have lifelong eczema. The onset of eczema is often before 1 year of age. It is thought that earlier and more effective management of eczema is important in helping children to 'grow out of' their eczema.

It is known that inherited abnormalities in the skin barrier can play a role in some cases. Impairment of the skin barrier results in increased permeability and reduces the skins antimicrobial function. Research indicates that the immune system plays a significant role in eczematous disease. Eczema can be exacerbated by co-existing allergies both in terms of its extent, its severity and the number of eczema flares. This makes it particularly important to exclude common allergies to achieve the best clinical outcomes in the management of eczema.

Formal allergy testing in conjunction with expert interpretation by our doctors can determine if there is an allergy contributing to your child's eczema. If an allergic environmental trigger such as House Dust Mite is found then this can be treated. We often see very significant improvements in this cohort of eczema patients.

Atopy refers to the tendency in a person towards having eczema, asthma and hay fever. It is characterised by an overactive IgE mediated immune response to environmental factors. The same factors or triggers have no effect on the skin or airways of a non-atopic person.

Atopy is primarily genetically inherited which means that atopy runs in families. Despite this, some children from atopic families never develop eczema, asthma or hay fever. Furthermore, children with no family history of atopy can suffer from any of these atopic conditions.

What makes the skin drier in Eczema?

Dry skin is a sign of reduced function of the skin as a barrier. Therefore, any external factors that make the skin even drier can make eczema more difficult to manage:

Most eczema sufferers are aware that certain substances irritate their skin and may even trigger an eczema flare. Eczematous skin is far more vulnerable to irritants such as:

Options to limit the impact of Irritants:

Both an individuals genetics and their environment contributes to their risk of developing eczema, its severity and the response to treatment. If an allergy is identified as contributing to exacerbations of eczema then removal of the allergen from the affected patient's environment can result in improvement of eczema. Immunotherapy desensitisation treatment to house dust mite or pollen allergies can also help improve eczema in people who suffer from these allergies.

People who have atopic dermatitis with elevated IgE levels are more likely to have food allergies or allergies to environmental factors such as grass pollen, cat dander and house dust mites. Current research indicates that skin barrier defects that occur in eczema increase the risk of food allergy. Primary sensitisation is more likely to occur when new allergens are introduced through inflamed eczematous skin rather than the gastrointestinal tract. It is therefore important that parents avoid introducing new foods, especially nuts and shellfish, during any acute exacerbation of eczema in infancy.

Environmental conditions can have a big impact on eczema.

Options to reduce the impact of a challenging climate

It is well known that physical, psychological and social stress can act as triggers for eczema flares.

Eczema itself may be the source of stress. It can cause significant discomfort which can lead to missing school or work. In addition, for some patients it can be a major cosmetic concern which leads to further stress.

The role of allergy in atopic dermatitis (AD) is complex. Atopic dermatitis is a chronic inflammatory condition of the skin with the hallmark feature of skin barrier dysfunction further worsened by inflammation and scratching. A more permeable skin barrier results in transepidermal water loss but it is likely that it also acts as a potential portal for developing allergen sensitisation and thus allergic disease. Indeed, atopic dermatitis is frequently the initial manifestation of atopy and allergic disease.

It has become apparent that the development and severity of atopic dermatitis involves a multifactorial process with genetic, environmental and inflammatory factors.

Genes encoding for structural proteins in the skin are likely to play a role in the resultant defective skin barrier. Filaggrin protein is key to the development of a healthy skin barrier. Multiple mutations causing loss of function in the gene encoding for Filaggrin protein have been identified and these show a strong association with the development of atopic dermatitis. One such study found 63% of mutation carriers developed eczema by 3 years old.

These Filaggrin gene mutations are carried by at least 9% of Europeans but will not always confer disease. Indeed, 55% of those possessing filaggrin heterozygosity do not develop atopic dermatitis and Filaggrin mutations were only identified in 30% of patients with eczema in Europe.

Interestingly, independent of atopic dermatitis, having a Filaggrin gene mutation was found to be associated with an increased risk to developing asthma.

Eczema and The Immune System

The adaptive immune response evolves to become more robust and more specific during the first six months of life. The two main types of T Helper lymphocytes, Th-1 and Th-2, generally operate in a state of equilibrium. It has been found in atopic dermatitis that an imbalance often exists with a far greater number of Th-2 cells and their associated cytokine messengers. Genetic factors responsible for encoding cytokines involved in the regulation of IgE synthesis have been identified in atopic dermatitis. This genetic predisposition can result in a polarizing Th2 immune response with Th2 cytokines released (IL-4, IL-5 and IL-13) which favour IgE production resulting in mast cell hyperactivity and thus inflammation. In addition, many of these patient have high levels of Immunoglobulin E (IgE) antibodies and eosinophils.

In addition, these Th2 associated cytokines reduce antimicrobial properties of the skin precipitating bacterial and/or fungal colonization, altering their microbiome and furthering damage to the skin barrier. This causes the skin to become more vulnerable to penetration by

Langerhans cells are the specialised macrophages that reside in the epidermis. In atopic dermatitis, they become activated by irritants and allergens and signal dermal T cells to produce an even greater Th2 response. This further impairs skin barrier function which allows heavier bacterial and fungal colonisation of the skin. The skin becomes more vulnerable to infection and infections can become more difficult to control.

The genetic predisposition to having a dysfunctional skin barrier and a dysregulated Th2 immune response in atopic dermatitis create the perfect environment for allergen sensitisation.

The initial presentation of early onset atopic dermatitis appears to be in the absence of IgE-mediated allergen sensitisation. However, within a short period of time, sensitisation occurs with elevation of total IgE alongside specific IgE antibodies to environmental allergens such as house dust mite, pollens and animal dander. In fact, it has been shown that approximately 80% of those with eczema have specific IgE sensitisation to at least one environment allergen.

Individuals with a history of pre-school atopic dermatitis are more likely to be polysensitised which increases with age. Interestingly a filaggrin mutation without a history of pre-school AD did not show a strong association with IgE sensitisation to foods and aeroallergens further corroborating the requirement for a defective skin barrier to allow the penetration of allergens and resultant sensitisation.

Furthermore, young children with atopic dermatitis are significantly more likely to be sensitised to foods including egg, milk, wheat, sesame, peanut and cod. In addition, children with a history of pre-school AD, particularly more severe and persistent AD, show a strong association with IgE sensitisation to food and aeroallergens.

IgE sensitisation does not necessarily correlate with the development of an allergy or allergic disease.

A number of trials for the use of Omalizumab (Anti-IgE therapy) in atopic dermatitis did not demonstrate it to be effective. However, more recently the ADAPT trial for a paediatric cohort with severe atopic dermatitis, atopy and high total IgE levels found a reduction in symptom severity with improved quality of life. A much greater improvement has been shown with Dupilumab (Anti-IL4 therapy) and systemic immunosuppressants such as Ciclosporin.

Evidence has shown worsening of atopic dermatitis symptoms following exposure to aeroallergens in IgE sensitised AD patients. However, despite expectations, allergen avoidance measures for aeroallergens have so far shown limited benefit. Similarly, there was poor evidence to support elimination diets for eczematous individuals with suspected food allergy and IgE sensitisation. Nevertheless, some benefit for egg elimination in infants with egg allergy and sensitisation was shown.

This further highlights the complex relationship between atopic dermatitis and allergy.

Eczema and The Microbiome

The impact of the microbiome on atopic dermatitis has come under increased scrutiny of late. Exacerbations of eczema are accompanied by Staphylococcus aureus proliferation in the affected skin and a reduction in cutaneous microbiome diversity with fewer cutibacteria and malassezia yeasts than are present on normal skin. This is important because it is thought that the microbiome contributes to inflammatory immune responses in the skin. Researchers report that emollients increases biodiversity in eczematous skin.

The functions of microbial components of the skin flora are of particular interest to researchers. Areas such as the elbows, knees and axilla have higher moisture and humidity levels and consequently attract different microbiomes. It is hypothesized that different organism profiles found in different areas of the body might be responsible for the characteristic distribution of atopic dermatitis.

Other triggers of Eczema exacerbations

The majority of atopic dermatitis patients are colonized by staphylococcal aureus which triggers inflammation via superantigen toxins, enhanced T cell activation and expression of IgE anti-staphylococcal antibodies. This in turn increases IL-31 expression driving pruritis. Scratching further encourages S. aureus binding. In addition this may cause an imbalance in the diversity of the skin microbiome further exacerbating atopic dermatitis. Furthermore, there is increased vulnerability to fungal and viral infections of the skin which can contribute. A source of bacteria is cream/ointment containers where 50% are contaminated.

How to assess severity of Eczema in clinic

There are no clinical tests to assess the severity of atopic dermatitis. We are reliant on the use of clinical outcome measures. The only validated measures include Eczema Area and Severity Index (EASI), the Severity Scoring of Atopic Dermatitis (SCORAD) and Patient-Oriented Eczema Measure (POEM). These measures are adequately responsive to monitoring of severity of eczema over time. In addition, the Dermatology Life Question Index (DLQI) has been shown to be an effective tool for assessing burden of disease.

The ease of use is essential for use in a clinic setting with a heavy workload and resultant time pressures and the EASI score takes approximately 6 minutes which is manageable. The SCORAD takes approximately 7-10 minutes to complete. POEM involves a 7-question questionnaire regarding eczema symptoms and their impact. Whereas DLQI involves a 10-question questionnaire mainly focussing on the impact of eczema.

The EASI score has two components to assess severity. It assesses the extent of eczema by identifying the percentage body area affected in four main body regions and assesses severity based on the presence of key inflammatory signs of atopic dermatitis– erythema, induration/papulation, excoriation and lichenification. The EASI scores range from 0-72 and does not include subjective symptoms.

Similarly the SCORAD measurement assesses the extent of eczema based on surface area involvement alongside severity criteria including erythema, oedema/papulation, oozing/crusting, excoriation and lichenification. In addition subjective symptoms of pruritis and insomnia are included. The maximum score is 103.