Asthma Pathology: What is Asthma?

Asthma is a condition that affects the small air passages in the lungs. In asthmatics, the airways become over-sensitive and react to things that would not normally cause a problem, such as cold air or dust. Muscles around the wall of the airway tighten up, making it narrow and restricts the airflow in and out of the lungs. The lining of the airways becomes swollen (just like your nose during a cold) and sticky mucus is produced which further clogs up the breathing passages. With the airways narrowed like this, you can see why it becomes difficult for air to move in and out and why the chest has to work so much. Tightening of muscle around the airways can happen very quickly and is the most common cause of mild asthma. It can be relieved quickly too, with the right inhaler. However, the swelling and mucus happen more slowly and need different treatments. They take longer to clear up and are a particular problem in serious episodes of asthma.

In these cases of Chronic Asthma, very often the symptoms can incude the upper airways of the nose, sinuses. The term United Airways Disease is used to describe this. United Airways Disease implies that asthma is but the lung component of a more complicated condition that involves the nose, sinuses, lungs and blood stream. In these cases, suffers often have an underlying allergy to airborne allergens such as House Dust Mite, Pollen or Animal Dander.

The approach for these patients should include avoidance measures of their particular allergic trigger and treatment of their nose and underlying allergy if possible.

Wheezing is very common in babies and toddlers yet not all children with wheeze go on to develop asthma. About one in five children will be diagnosed with asthma sometime during childhood.

Asthma can be unpredictable, and affects each child differently. Many children will grow out of their asthma.

Cases Studies: Asthma in the context of nose and sinus problems

1. Case Study: a 33 year old publishing editor had an intractable cough.  She also had asthma and was using standard full strength anti-asthma medication.  The cough was socially embarrassing and spoiled her quality of life.  Any type of conversation was cut short by a bout of convulsive spluttering.  She attended two GPs in the same London practice and the respiratory unit of a top London teaching hospital.  There she was reviewed by three specialists (one a pulmonary allergist), had multiple tests including chest X-ray, pulmonary function tests and allergy tests.  She showed very large allergic sensitivity to house dust mites, pollens and cat hair.  She was given a fact sheet on dust mites and de-cluttered her apartment to little more than bare boards and a wooden bed.  Her cough continued.  The hospital advised nothing else could be done and suggested to her GP that this was possibly a psychological cough and recommended a mild tranquilliser.  In desperation (and convinced it was not a psychological cough) she sought help elsewhere.

During questioning she agreed that her nose was blocked all the time, that her senses of taste and smell were poor and that her hearing was down (“I have had to turn up the volume on my IPod recently.”).  When examined she was found to have severe swelling of her nose lining with fluid blistering of the turbinates (the shelves along the nose).  “You’re the first doctor to have inspected my nose,” she remarked.  There was fluid behind both ear drums suggesting Eustachian tube obstruction.  Further questioning revealed she worked in a smoky office (the non-smoking ban hadn’t come into effect in the UK in small offices) and that the owner had a large cat that shed hair.

It was explained that the cough was almost certainly due to her aggressive, un-recognised and un-treated nose and sinus allergy.  It was suggested that while her home environment might be perfect, her workplace was a definite health hazard.  She was treated appropriately and the nasal cavity stabilised.  To say her life changed for the better is an understatement: symptom scores for her sinusitis symptoms and asthma dropped by 80%.  The cough flared at work and in smoky environments so she quit her job and found a better (and safer) office.  Now she is enjoying a dramatically improved lifestyle.  Her hearing has improved as well.  However she’s quite annoyed with the NHS and that top London teaching hospital (not to mention her smoking colleagues and the boss’s cat).

The relationship between allergic nose/sinus problems and asthma has been known about for some time and patients commonly present with both disorders.  Experts believe allergic sinusitis and asthma are connected by a number of different pathways.  For example, post nasal drip may contain cells that slip into the lungs and trigger asthma-type symptoms.  Also, special blood units (called Th2) move from the nose and sinuses to the bone marrow to produce a number of allergy groupings.  They then transfer into the blood circulation and ‘stick’ in the nose, sinuses and lungs, causing further allergic inflammation (swelling and irritability of the tissues involved).  The immunology is quite complicated by the bottom line is this: treat the affected nose and sinuses and you improve any co-existing asthma significantly. 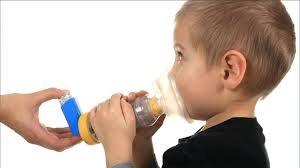 2. Case Study: Patrick is 7-year-old with troublesome asthma.  He’s seen many doctors, including asthma specialists and is on a lot of anti-asthma medication.  But he’s still troubled with his chest and each breakdown in well-being seems to start with a head cold.  There is a strong history of allergy in the family (two sisters had eczema as babies, his father sufferers hay fever each summer) but no attention is paid to Patrick’s parents’ request for allergy testing (‘waste of time, could be anything, try lifting the carpets,’ are the dismissive comments).  Each doctor advised that the boy had difficult asthma made worse by repeated virus infections.  Live with it, they said.  Stop annoying us, they didn’t say but implied.

When Patrick was evaluated here a completely different interpretation was put on his ill-health and its management.  The examining doctor inspected the inside lining of Patrick’s nose (‘no other doctor has ever done that’, commented Patrick’s mother). It was obvious Patrick had a severe nose and sinus allergy (swollen, pale and blistered nose lining, dramatic ‘allergy-attack’ features at the highest point of his nose).  He was wheezing loudly despite taking his prescribed anti-asthma medication.

Allergy testing revealed strong positives to dust mites and cat hair (the family had a pet cat and it often slept on Patrick’s bed).

His new management included an aggressive anti-allergy regime that restored his nasal mucosa to normal.  Because Patrick had both nose and sinus and lung allergic challenges he was prescribed a special anti-allergy medication.  For the first time in years Patrick’s quality of life improved.  He showed a dramatic recovery in his chest as his nose and sinus problems came under control.  After about four weeks his asthma medication was reduced by as much as 80%.

Patrick now has excellent asthma control with less drugs being used.  And he feels much more comfortable in his ‘head’, now that his nose is unblocked and his sinuses function properly.

What can we conclude from this?  Patrick’s upper airways’ allergy (nose/sinus area) was impacting on his lower airways (lungs, causing asthma).  Once identified and treated, Patrick’s out-of-control allergic sinusitis changed the boy’s life forever.  And his parents weren’t half pleased too.

It is now recognised internationally that asthma is but one component of a more complex and complicated inter-reaction of nose/sinus problems and the lungs.