What is Food Allergy?

Food Allergy occurs when the immune system misidentifies a particular food as a threat and directs an immune response against it. This results in the generation of immune memory against that particular food so that future exposure may cause a more aggressive reaction. The symptoms resulting from food allergy usually occur within seconds to minutes of ingestion. Symptoms may be relatively mild but they can also be very serious and trigger a life threatening reaction known as anaphylaxis.

The symptoms of food allergy may involve the skin, airways and digestive tract. The most common symptoms are:

In the most serious cases a person has a severe allergic reaction (anaphylaxis) which can be life threatening. The symptoms of anaphylaxis include:

An allergic reaction can be caused by almost any food but certain foods are responsible for the majority of food allergies.

The foods that most commonly cause an allergic reaction are:

IgE Mediated Food Allergy is found in 5% of young Irish children and about 2% of older children and adults. Fortunately, the number of deaths triggered by food allergy is very small. Severe life threatening allergic reactions known as anaphylaxis only result in fatalaties in about 1 in 1-3 million people per year. In addition, these deaths are more likely to be triggered by medication, blood transfusion or insect bites rather than food allergy. This certainly does not mean that food allergy is not dangerous and it is essential that food allergies are managed appopriately to prevent harm.

While you do not inherit a particular allergy directly, you may inherit a tendency to be allergic. This is called atopy. It is therefore very common for allergies to run in families. In addition, people who suffer from food allergy often also have other allergic conditions such as asthma, hay fever and also eczema in particular.

It is known that about 1/3 of children with eczema will develop a food allergy. When a child's eczema begins at an earlier age and is more severe they are at increased risk of developing food allergy. Current research indicates that skin barrier defects found in eczema alter immune function and can induce food allergy secondarily. Primary sensitisation is more likely to occur when new allergens are introduced through inflamed eczematous skin rather than the gastrointestinal tract. It is therefore important that parents avoid introducing new foods, especially nuts and shellfish, during any acute exacerbation of eczema in infancy.

Introducing nuts in to your child's diet before the age of one (but at least 7 months of age) greatly reduces the risk of developing a nut allergy. It is also advisable to avoid introducing a new nut or shellfish to a child for the first time while they are unwell.

A food allergy occurs when the body's immune system overreacts to a food resulting in an immune response directed against the perceived threat. After the initial exposure the immune system labels the food as a threat by producing specific IgE antibodies against it which primes your immune system to react more aggressively to any future exposures. On subsequent re-exposure to the food immune cells release chemicals including histamine, leukotrienes, cytokines and prostaglandins which results in allergy symptoms and potentially anaphylaxis. For a more detailed explanation of the pathophysiology please see below.

Food allergies are divided into 3 types:

Treatment of Allergic Reactions from Food

Skin Prick Allergy Testing is the recommended test used to identify food allergy. If you think you or your child has a suspected food allergy make sure you have this confirmed by skin prick allergy testing. It is important that the results are interpreted by a doctor who has specialised in this area. Performing an allergy test is easy, the skill lies in interpreting the result in the context of the patient's symptoms. Sometimes there is no link between the suspected allergen and the symptoms.

Commercial allergy testing kits are available, but using them isn't recommended. Many kits are based on unsound scientific principles. Even if they are reliable, you should have the results looked at by a health professional.

What is the difference between Gluten Intolerance, Wheat Allergy and Coeliac Disease?

Gluten Intolerance: There is no scientifically validated test for gluten intolerance or any other food intolerance. Intolerances typically result in symptoms such as bloating, flatulence, diarrhoea and abdominal pain. Intolerances do not result in dangerous or life threatening allergy symptoms.

Wheat Allergy: An allergy to a food substance such as wheat involves the immune system misidentifying a protein within that food as a threat. This is known as primary sensitisation and results in the generation of specific IgE mediated immune memory against the food. This means that any future exposure to this food will result in allergy symptoms.

Coeliac disease: This is an autoimmune condition rather than an allergy. An immune response is directed against the small bowel whenever gluten is ingested. Coeliac disease is tested for via an antibody blood test (anti-TTG) or an endoscopic gastric biopsy. There is no cure for Coeliac disease but strict avoidance of gluten usually controls the symptoms. Gluten is a protein which is found in wheat, barley and rye. These cereals are used in pasta, breads, cakes and beer.

When to seek medical advice

If you think you or your child may have a food allergy, it is very important to ask for a professional diagnosis from your GP. If appropriate, they can then recommend a reputable specialist allergy testing clinic such as Allergy Ireland for expert interpretation.

Many parents mistakenly assume their child has a food allergy when their symptoms are actually caused by a completely different condition.

There are two phases which are paramount to the development of an allergy. Phase one occurs when an atopic individual is first exposed to the allergen. The allergen is taken up by antigen presenting cells particularly dendritic cells (DC) and is processed into peptide fragments. The DC will move through the lymphatics towards the lymph node where it will present this peptide fragment to a naïve T cell. The naïve T cell becomes activated to express cytokines particularly IL-4 which drives the differentiation of these cells to Th2 helper cells.

An environment rich in cytokines IL-4 and IL-13 is created and is responsible for inducing IgE production from B cells. Additionally, IL-5 is responsible for eosinophil recruitment and activation. The cytokine profile is vital as it determines a Th2 immune response.

In the meantime, T cell dependent activation of B cells stimulates further cytokine production particularly IL-4 and promotes irreversible immunoglobulin class switching to allergen specific IgE antibodies. Allergen specific IgE will attach to mast cells and basophils. This is referred to as primary sensitisation. In addition, memory B cells are generated and a small number of memory T cells remain. 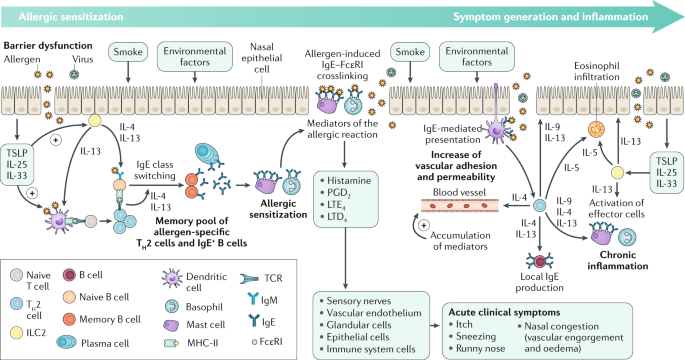 Phase two occurs on subsequent exposure to this allergen. The allergen binds to the sensitised mast cells which triggers degranulation of the mast cell thereby releasing pre-stored and newly synthesised inflammatory mediators such as histamine, leukotrienes, prostaglandins and cytokines. These contribute to vascular permeability, eosinophil infiltration and increased mucus production.

PFAS is also known as Oral Allergy Syndrome and it is caused by cross reactivity of food proteins with pollens such as grass, birch and ragweed. The immune system of those affected misidentifies pollen with proteins of similar appearance found in certain foods and directs an immune response against them.

Pollen Food Allergy Syndrome is most often seen in older children and adolescents who have been eating the same foods for years without any issues. Young children under the age of 3 are not affected as they are too young to have developed hay fever as yet.

The symptoms include itch, tingling and swelling along the inside of the mouth, lips, tongue and throat after ingestion of certain foods. The symptoms usually remain localised to the mouth and resolve quickly without treatment. In a small percentage of patients the symptoms may extend further than the mouth and this subset may be at risk of Anaphylaxis.

Management usually involves avoiding the uncooked form of the food. Cooking the food alters the shape of the misidentified protein thereby avoiding an immune response. If symptoms are still triggered with cooked food then the food must be avoided. PFAS is often found in the context of poorly controlled allergic rhinitis so treating these symptoms may also help.

Where high risk foods are involved or more profound symptoms are triggered then it may be necessary to carry an adrenaline pen.