What are Nasal Sinuses?

Nasal Sinuses are cave like pockets in the face. There are four sinuses found on each side of the face called the maxillary, frontal, ethmoid and sphenoid sinuses.

The sinuses are lined with mucus membanes containing hair like projections called cilia. These hairs facilitate the drainage of secretions from the sinuses through the narrow passages that connect the sinuses to the nose.

What is the function of the Sinuses?

The function of nasal sinuses is not known for certain but may include warming and humidifying inspired air, improving vocal sound resonance and reducing the weight of the skull.

Sinusitis is the medical term for inflammation of the sinuses. It is classified as either Acute or Chronic.

Acute Sinusitis refers to a new viral or bacterial infection of the mucosa lining the nasal cavity and paranasal sinuses. This causes a build up of pressure within the sinuses. The symptoms usually consist of unilateral facial sinus pain and a fever.

Chronic Rhinosinusitis is inflammation of the sinuses and nasal cavity which lasts for at least 3 months. The symptoms typically include facial discomfort or pain corresponding to the affected sinuses. The majority of these cases are caused by allergies to inhalent allergens such as house dust mite, animal dander, pollen and mould. Chronic sinusitis can also be caused by predisposing structural issues such as septal deviation, narrow paranasal channels and nasal polyps but also hormonal changes such as during puberty, pregnancy or menopause.

Almost all sinus problems begin inside the nose. The sinuses connect with the internal lining of the nose via narrow passages. These passages must remain clear or the normal drainage and clearance of mucus from the sinuses will be curtailed leading to inflammation of the nasal mucosa. This initially results in sinus pressure but it also produces the perfect conditions for bacterial overgrowth and infection inside the sinuses.

Why are some people more prone to recurrent Acute Sinusitis?

Patients who suffer from Chronic Rhinosinusitis are particularly vulnerable to episodes of Acute Sinusitis as their paranasal sinuses and passages are already compromised. This is usually the result of either inhalent allergies but it may also be due to congenital or acquired structural sinus issues. 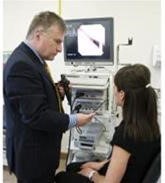 How is Sinusitis Diagnosed?

In order to establish the correct diagnosis it is recommended to combine thorough history taking with endoscopic examination of the nasal cavity. Skin prick allergy testing can be used to assess whether inhalent allergies are a contributing factor. This is particularly useful in cases of recurrent Acute Sinusitis or Chronic Rhinosinusitis. Sometimes CT imaging may also be useful.

How is Acute Bacterial Sinusitis treated?

Acute Bacterial Sinusitis is treated with a course of antibiotics which are usually given for about two weeks.

Steroid drops may be used to unblock the obstructed paranasal passages and sinuses.

Short term use of decongestants tablets such as pseudoephedrine and decongestant nasal sprays containing xylometazoline may also be useful. Paracetamol and ibuprofen can be used in combination if analgesia is required.

How is Chronic Sinusitis treated?

Chronic Rhinosinusitis is treated with long term steroid sprays to reduce the inflammation and swelling of the nasal mucosa. The most recent generation of these nasal sprays are recommended as they have almost no systemic absorption and are therefore very safe. e.g. Nasonex (mometasone) and Avamy's (fluticasone)

Non-drug options such as Rhinolight and Immunotherapy are also available.

If an anatomical reason is found for chronic sinusitis then this may need to be surgically corrected.

What are nasal polyps?

Nasal Polyps are benign painless fleshy growths that form inside the nose and sinuses.

Nasal polyps may as a result of chronic inflammation of the nasal passages. They are associated with asthma, recurrent infection and inhalent allergies such as House Dust Mite and Pollen. Genetic predisposition also plays a role and nasal polyps often run in families.

What problems can nasal polyps cause?

Although they are non cancerous they can cause mechanical problems within the nose by obstructing the nasal passages and connections to the sinuses. This can result in reduced airflow and breathing problems, diminished sense of smell and taste, sinus pressure and recurrent sinus infections. It is therefore important to treat the allergic triggers that potentiate  chronic inflammation of the nasal passages. This includes house dust mite, pollen and animal dander allergy.

How are nasal polyps treated?

Steroid nasal drops and sprays are used to help curtail the growth of nasal polyps. In those patients who also suffer from inhalent allergies it is important to use allergen avoidence measures to minimise ongoing exposures. Allergen desensitisation known as Immunotherapy can also be considered.

If the polyps are causing significant symptoms then surgical removal is recommended. Following surgery it is important to continue medical management to help reduce the risk of recurrence of the nasal polyps.

What might I experience when my sinuses become inflamed or infected? 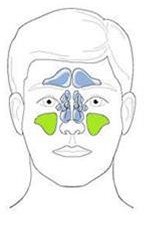 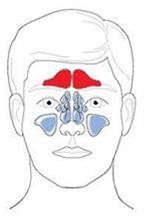 This 17 year old male presented with long history of nasal obstruction, headaches and a runny nose. Nasoendoscopy revealed a grossly swollen nasal lining obstructing the sinus openings. CT imaging showed that the ethmoid and maxillary sinuses were thickened. These changes were the result of chronic inflammation and obstruction of the entrances to the sinuses.

Case 2: Rhinitis is often associated with Sinusitis as inflammation of the nose can progress into the adjoining sinuses.

In this image there is severe swelling of the lining in the nasal cavity causing symptoms such as blockage, mouth breathing, diminished sense of smell and taste. In this case, the inflammation was triggered by an aggressive allergy to dust mites and grass pollens.

This image is taken from a 25 year old with allergic rhinits. The internal surface of the nose is so allergically irritated that fluid is beginning to swell the lining. If left  untreated, the shiny bubble-like area at 8 o’clock will become a polyp. In long standing nose and sinus allergy, if an infection occurs in addition to the background changes then considerable extra damage can be inflicted on the soft tissue.

Even in children as young as 5 years of age, considerable swelling can occur within the nasal cavity. This in turn obstructs the sinus openings causing sinus problems. And in turn may act as a trigger or aggravating factor in asthma. If the nose and sinus problems are treated then asthma may improve significantly.