Perennial Allergic Rhinitis occurs all year round and is most often caused by allergens such as House Dust Mite and Animal Dander (cat, dog, horse etc).

Seasonal Allergic Rhinitis (hay fever) affects people who are allergic to pollen and therefore occurs mainly in spring and summer but can even drag on until late autumn. Most sufferers are allergic to grass pollen only (10,000 pollen grains fit on the tip of a pin) but a significant number are affected by a combination of tree and grass pollen allergy. Their season starts in early spring with mild nasal irritation. By the time the summer months arrive they are already compromised so that even small amounts of grass pollen can trigger quite aggressive symptoms. If the summer is especially warm and sunny with high surges of pollen, then those three to four months can be a write-off. For those with the extra burden of mould spore allergy hay fever misery can drag on through the autumn months.

Blocked nose:  due to swelling of the nose lining and the nasal turbinates, the soft ‘shelves’ inside the nasal cavity.

Sinus pain/congestion:  when the openings from nose to the sinuses become blocked, there is an increase in pressure within the sinuses which manifests as discomfort along the forehead and cheek bones.

Reduced sense of taste and smell: as the allergic challenge worsens increased swelling of the turbinates in the upper parts of the nose compress the nerve endings for taste and smell located there. The sense of smell is affected first.  Bizarrely bad smells fade initially; you may not notice foul odours but can appreciate perfume bouquets. However, by the time you realise you’re not getting any smells your sense of taste is probably diminished. The flavour for spice fades first. As foods taste bland unwittingly you add more salt and pepper to flavour dishes. You tolerate more chillies and spicy foods than others when dining.

Reduced hearing / itchy ear canals and ear popping:  further swelling involves the back of the throat and eustachian tube, a narrow channel that connects to the inner ear.

Cough, wheeze and shortness of breath:  the nose and sinus inflammation begins to affect the lower respiratory tract.

Eyes redden, itch, water and swell:  as pollen grains irritate the eye lining the skin underneath the lower eye lids fills with fluid making them puffy. In severe hay-fever, especially with children, the lining of the eye can be damaged from constant rubbing to relieve the intense itch. Sometimes the inner surface of the upper lids distort with what look like ‘cobble-stone’ bumps.

Itchy mouth and throat or oral-allergy syndrome:  Some hay fever sufferers experience itch and swelling along the inside of the mouth, lips and tongue when they eat certain foods, especially fruit and vegetables, during the pollen season. This is due to cross sensitivity of food proteins and some pollens. For example if you’re allergic to birch tree pollen you may also react to celery, curry spices, raw tomato, raw carrot, apples, pears,  cherry, hazelnut, almond and kiwi fruit. If you’re allergic to grass pollen you may react to oats, rye, wheat, kiwi fruit and raw tomato. Ragweed pollen allergy may trigger symptoms when eating banana, cucumber, melon, zucchini/courgette, sunflower seeds, chamomile tea or Echinacea.

If even 50% of these symptoms occur hay-fever sufferers can feel exhausted and drained.

The pollen count measures the amount of pollen in the air over 24 hours. Aggressive sneezes can be heard first along the warmer western coasts. By the end of May high pollen counts can be detected countrywide. Pollen allergy symptoms can change with weather related production, dispersal and quantity of pollen grains in the air. Grass pollen surges about 2 – 3 weeks earlier at sea level compared to mountainous areas. High levels of pollen occur on warm, dry and sunny days. Low levels occur on wet, damp and cold days. Rain washes pollen out of the air. Pollen is released in the morning and carried higher into the air by midday. It descends again to ‘nose-level’ in the late afternoon. Cities and dense urban areas stay warmer longer and hold pollen. Combine this with atmospheric pollution from car fumes and you can understand why city dwellers suffer more aggressive hay fever than their country cousins. 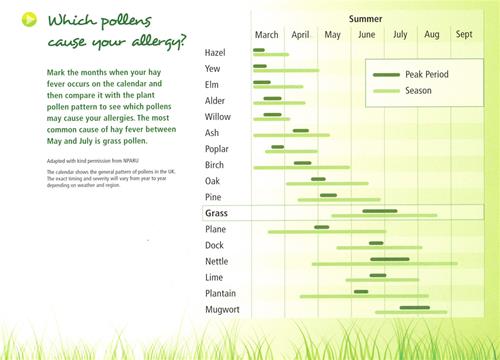 Your pollen season symptoms vary depending on where you live and what you’re allergic to. Certain pollens are more common in city environments, forests and mountainous areas. Pollen from timothy grass, perennial rye and ragweed circulate throughout Europe in addition to tree pollens such as Birch which is a common culprit.

Allergy triggering plants and trees can be divided into five European areas: 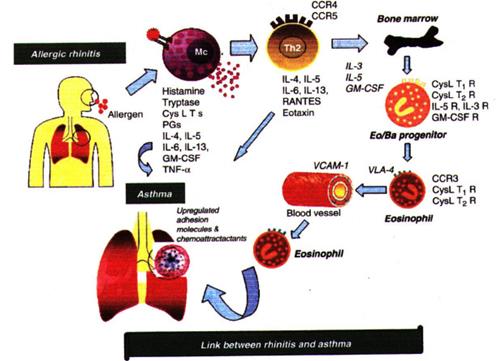 Thunderstorms during the pollen season can trigger asthma attacks ranging from mild to life threatening.  Pollen grains are carried at ground level by the strong air currents in thunderstorms. Then the pollen grains burst, releasing their allergy provoking material (allergens). The allergens are carried as aerosols in the wind currents and easily inhaled, penetrating deeply into the nose and sinuses and lungs triggering breathing crises. For some hay fever sufferers this may be the first time they’ve ever experienced asthma.

Such events have been reported in Birmingham and London in the UK, Naples in Italy and Melbourne in Australia.